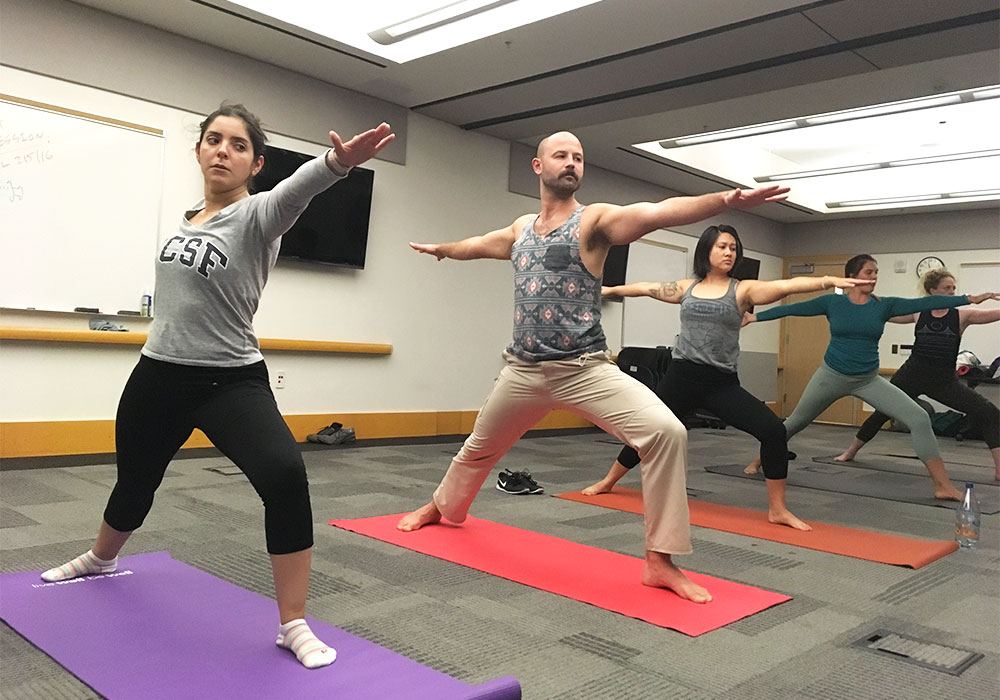 Despite spending seven hours in the training lab, student Vanessa Simmons wasn’t ready to go home yet. Her head brimming with new skills acquired that day, she changed into activewear and headed to a classroom in the basement of Parnassus Library where classmates pushed aside tables to make way for yoga mats.

“The last thing I thought I'd do after those long days was yoga in a classroom,” Simmons said. “Instead, when I go home after yoga on Tuesdays now, I feel pretty good. I'm energized, renewed, calm and full of gratitude.”

Starting this school year, the Master’s Entry Program in Nursing (MEPN) is introducing a weekly one-hour self-care elective to equip students with stress-reducing skills that can carry them through the academic rigor of the program and through their nursing careers.

“We preach self-care to the students, but we didn’t have avenues in our program to offer it,” said faculty member Katie Hettinger, MSN, RN. “With this new elective, we are offering one hour of optional time each week for students to practice self-care and mindfulness.”

In a field in which health care professionals often put the wellness of patients before their own, nursing schools are increasingly recognizing the importance of self-care in academic and clinical settings. The University of Virginia, for one, has launched a Compassionate Care Initiative while Florida Atlantic University offers a Caring for Self course to all undergraduate nursing students. In February, the nursing organization Sigma Theta Tau held its first conference focusing on helping academic and clinical leaders create healthy work environments.

At the UCSF School of Nursing, students in the three-year accelerated MEPN program spend an average of eight hours a day in classes or clinical training. The most intense clinical days span 12 hours.

During summer session, the new self-care elective was offered Tuesday afternoons after students spent seven hours in the skills lab. Starting in the fall quarter, the elective will be offered Monday afternoons. The sessions are a mix of yoga, aromatherapy, mindfulness and breathing exercises, and are led by instructor Lynn Chiarello, MSN, RN, CNM, CYI, a certified nurse midwife who taught in the MEPN program from 2004 to 2010.

Chiarello incorporates the week’s MEPN curriculum into each self-care session she leads. For example, the week students received cardiac training, Chiarello led students in yoga poses that increased the heart rate and addressed heart mindfulness. When the students were learning about the gastrointestinal system as part of their curriculum, Chiarello wove in yoga poses that promote digestion and taught exercises that can alleviate gastrointestinal symptoms for patients.

“It’s primarily setting up nursing students for success, both physically and mentally,” Chiarello said. “Through yoga, breathwork and mindfulness, I am providing the students with a toolbox to access at any time to support physical strength, mental clarity, improved memory function, increased relaxation and decreased cortisol levels. This ultimately will help tackle burnout, reduce the risks of back injury and will make for a happier nursing student, which directly affects patient care. You can deliver good patient care when you invest in your own self care.”

The self-care sessions also have physiological benefits. Exercises aimed at developing strength in the body’s core help safeguard against lower back injury, which account for 20 percent to 70 percent of nurse injuries depending on the clinical setting, Chiarello said.

The convenience of being able to practice yoga on campus after class was what initially drew some students in, but the benefits gained have kept them coming back.

“In skills lab, there’s a ton of information they throw at you,” added MEPN student Mat Sommers. “But then you come here and it’s like a total reset. Afterward, you can go get your work done with a clear mind, as opposed to feeling anxious.”