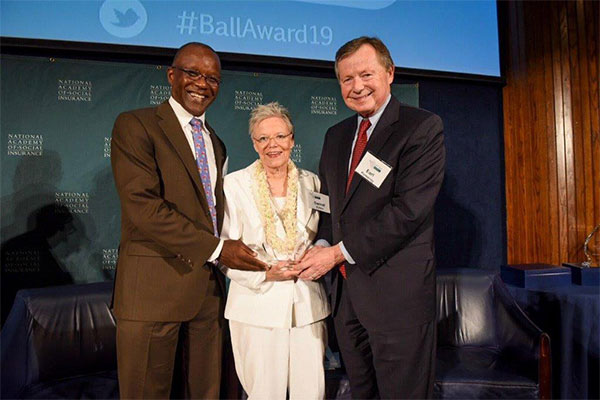 Professor Emerita Carroll Estes, PhD, FAAN, has been honored with the 2019 Robert M. Ball Award for Outstanding Achievements in Social Insurance from the National Academy of Social Insurance.

The award was presented at a June 27, 2019 ceremony in Washington D.C.

Estes is recognized as a founding scholar in the field of “political economy of aging” and has devoted her life’s work to improving the health and economic security of vulnerable and underserved populations, particularly older people, women, LGBTQ, people of color and people with disabilities.

She founded the Aging Health Policy Center at UCSF, and in 1985 took it to the next level by securing University of California Organized Research Unit designation for it as the Institute for Health & Aging. She served as its founding director until 1999. She also chaired the Department of Social and Behavioral Sciences in the School of Nursing from 1981 to 1992. In 2014, Carroll received the UCSF Medal, the campus’s highest honor.

Estes’s public service has included consultancy to U.S. Commissioners of Social Security, U.S. Senate and House Committees on Aging, and federal commissions for several decades. She is past-president of the Gerontological Society of America, American Society on Aging, and the Academy for Gerontology in Higher Education.

She is the author and co-author of more than 20 books, two of which have been adopted in more than 400 schools of medicine and nursing. Her most recent book, Aging A-Z: Concepts Toward Emancipatory Gerontology (written with Nicholas DiCarlo), is hot off the press.