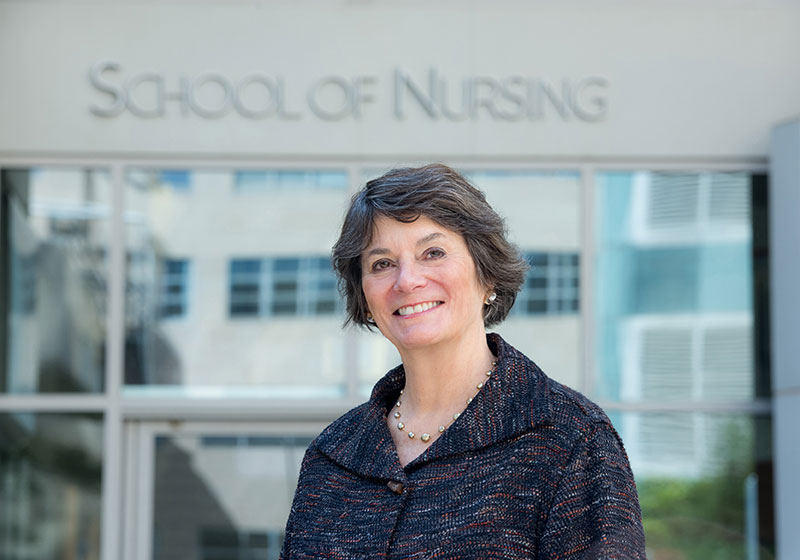 Catherine Gilliss has devoted her career to leading and developing institutions to make their maximum contribution to their constituent members and to society.

As dean of the UCSF School of Nursing, Gilliss leads one of the top nursing schools in the country, advancing its commitment to combine research and scholarship with exceptional graduate clinical education; forging new partnerships at UCSF and beyond to build upon the school’s excellence; and developing new ways to sustain the school’s growth and impact.

She assumed the deanship in September 2017, returning to her alma mater where she earned her doctoral degree and was a postdoctoral University of California President’s Fellow. She served on the School faculty for 14 years, during which she also was a department chair.

An accomplished academic leader, Gilliss previously helmed the Schools of Nursing at Yale University and Duke University in the capacity of dean and dean and vice chancellor, respectively. Under her leadership, both schools expanded the size and quality of the faculty, staff, student body, and the quality of academic programs.

Gilliss’ scientific career has focused on the bidirectional influences of the family and chronic illness. A pioneer in the field, she was recognized with the 2007 Distinguished Contribution to Family Nursing Research Award. Her groundbreaking edited book, Toward a Science of Family Nursing, was the first compendium of scientific information on how chronic illness affected the family, and vice versa, and suggested nursing interventions to promote the health of both patient and family.

An involved leader in professional organizations and community boards, she was president of the National Organization of Nurse Practitioner Faculties (1995–1996), president of the American Academy of Nursing (2009–2011), and president of the board of the North Carolina Foundation for Nursing (2016–2017). She served as a regent of the University of Portland (OR) (1994–2000) and as vice chair of the board for the Triangle Residential Options for Substance Abusers (TROSA) (2016–2018), where she chaired the successful capital campaign for a new Comprehensive Care Center.

A BSN graduate of Duke University, Gilliss earned her MSN in psychiatric mental health nursing at The Catholic University of America, a post-master’s certificate in primary care at the University of Rochester, and her PhD at UCSF.