Alumnus Catherine Dodd is a nurse and health policy advocate. She has held numerous positions, including chief of staff to Nancy Pelosi, presidential appointee to U.S. Health and Human Services, and director of the San Francisco Health Service System. In this column, Dodd shares her experience in shaping health care and offers advice to others seeking to advance change. 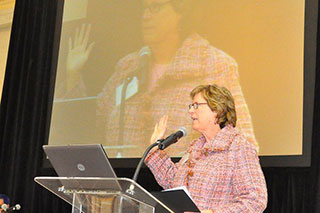 “Each one of us is just one personal or social injustice away from being involved in politics, and each one of us can make a difference.” — Candace Lightner, founder of Mothers Against Drunk Driving

Since 1979, this adage inspired my work in health policy, when, as a novice UCSF BSN, I was shocked that Medi-Cal would not cover prosthetics for women who had mastectomies. So began my political journey. I quickly learned to write letters to legislators, meet with their staff, and to work on and contribute money to political campaigns. That is still my advice to nurses seeking to influence policy. I have gotten to know many candidates interested in what nurses are concerned about and upon whom I can still call to express my “nursing” perspective.

Over the length of my career spanning local, state and federal levels, I have leveraged my “nursing” perspective and myriad roles to weigh in on important health issues, shape health policy, and advocate for nurses to have a consistent seat at the table.

While completing my Master’s degree in Nursing at UCSF, I worked for a member of the San Francisco Board of Supervisors and helped draft the legislation creating the SF Health Commission. I insisted on replacing the word “physicians” with “providers” in the composition of the Commission. I would serve on the Health Commission 25 years later.

In 1987, I organized “Nurses for Pelosi,” the American Nurses Association PAC endorsed her, and when she was elected, I worked part-time in her district office on health and senior issues. She asked me what policies I would like to see passed. I answered: “on-site health care for families who live in subsidized housing.” Pelosi introduced and Congress passed Community Development Block Grant funding to build on-site clinics. Representative Pelosi taught me many things, among them: “count your votes before the hearing begins, politics requires thick skin and always be polite.”

I left to take the position of Director of Government Affairs for California Nurses Association (still part of ANA). ANA endorsed Bill Clinton for president. After Clinton’s election, then CNA President Mary Foley, RN, (professor at the UCSF School of Nursing) and I were invited to the White House to meet with Hillary about health care reform. I was trained as a speaker on Clinton’s Health Reform plan and traveled the country representing her.

During Clinton’s second term, he appointed me and I became the first woman Region IX Director in the U.S. Department of Health and Human Services. I proudly introduced myself as a nurse and brought consideration of the individual, family, and community to all policy tables.

In 2001, I served as Representative Pelosi’s District Chief of Staff as she began her efforts to become the first woman Speaker of the House of Representatives. I weighed in on policy issues and identified funding needs in SF. Among them: the Homeless Prenatal Program founded by Martha Ryan, NP, (UCSF); Glide Health Services Health Clinic run by UCSF NPs; biomonitoring in CA for environmental chemical causes of cancer; and recommending RN policy fellows for the Speaker’s Washington D.C. office.

I went on to serve as Deputy Chief of Staff for Health and Human Services under then-Mayor Gavin Newsom. I went on to direct the City and County’s Health Service System, where I negotiated health benefits for over 112,000 employees and retirees. I led the creation of the first employer Affordable Care Organizations (ACOs), established a wellness center, and added benefits including comprehensive sex reassignment, infertility and palliative care. I also made sure that NPs and CNMs were listed as providers in the benefits’ booklets.

In 2013, a Mantle Cell Lymphoma diagnosis, chemo and bone marrow transplant slowed me down, but reinvigorated my commitment to environmental health. In 2019, Mary Foley and I attended Jane Fonda’s “FireDrill Friday” where health professionals peacefully rallied in front of the U.S. Capitol. I joined Jane Fonda, Gloria Steinem and others and was arrested. Since then, I’ve begun working with the Alliance of Nurses for Health Environments in California as a policy advisor, advocating on policies including pesticides (which my lymphoma was linked to), chemicals, climate change, fracking, recycling, decreasing RFR, air and water pollution, the drought and more.

My advice: Network. Acknowledge people. Thank people. Stay connected. And remember: “each one of us can make a difference.”

This feature was published as part of the UCSF School of Nursing's Science of Caring online publication.