By Jen A. Miller 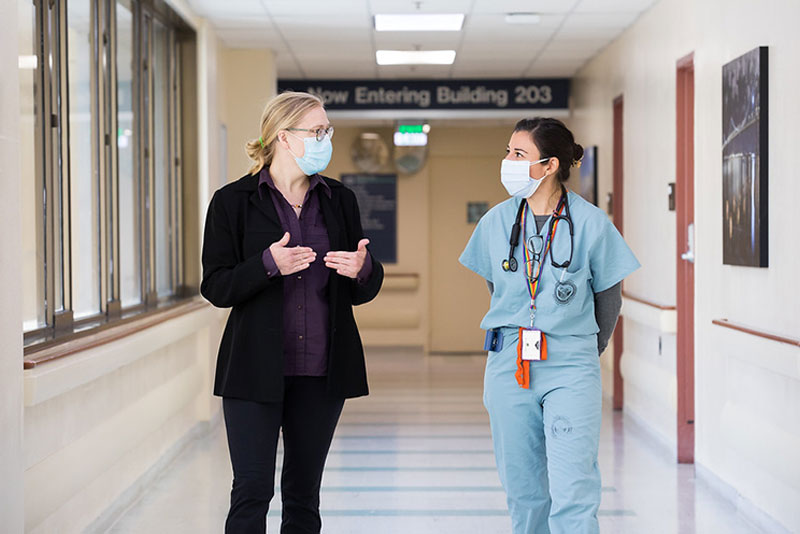 Jacqueline Carrillo became the first person in her family to earn a college degree in 2010, but she didn’t stop there. She went on to attain her master’s degree at the UCSF School of Nursing in 2021, persevering through academic coursework, clinical rotations and a full-time job during the pandemic.

She is now wrapping up a yearlong primary care nurse practitioner residency program called EdPACT at the San Francisco VA Medical Center, where she is helping create a pipeline program to mentor first-gen high school students who are interested in a career in health care.

As much as she loves the program, it’s just one step in her education. In the fall, she’ll return to UCSF where she is set to begin her PhD at the School of Nursing.

That trajectory is possible in part, she said, because of the FirstGenRN program at the UCSF School of Nursing.

The first of its kind in the U.S., the FirstGenRN program identifies applicants and students who are the first in their family to go to college, and provides them with mentoring and support in advancing their careers.

“It’s a space where you can be secure in airing out concerns, worries and anxieties, and feel heard without being judged,” said Carrillo. “Aside from providing us with resources and support, it’s just a nice community of people.”

About 10 to 30 students go to the program’s monthly sessions since it started. It’s a mix of students from the school’s master’s entry, master’s and doctoral programs, said Laura M. Wagner, PhD, RN, FAAN, who launched the FirstGenRN program at the School through a 2017 UCSF Innovations Funding for Education Grant.

Since then, other schools around the country have reached out to create their own programs in its form. “It’s really about raising the visibility of an invisible identity,” she said.

FirstGenRN students attend monthly group sessions, either on Zoom or in person, to discuss topics in one of six areas: self-care, time management, mentoring, family, finances and skills they’ll need in the future, like “how do I negotiate a salary when my parents never imagined making this kind of money,” Wagner said. She also meets with FirstGenRN students individually to discuss their goals and concerns, and helps them figure out how to overcome hurdles on the way to realizing their career dreams.

Wagner is a first-generation college student herself. She grew up in a poor working class family where continuing education after high school wasn’t seen as a life goal. She experienced culture shock when she started college, in part because she didn’t have the same background as her classmates, or the same kind of support in terms of family or financing.

But she also saw then, as she sees now, the strengths that nurses from different backgrounds bring into the profession, and why they should be supported in their education because of the differences they’ll make in advancing health care and advocating for their patients.

For example, a nurse who commutes long distances understands how to take care of a patient who puts in that same commute time to get between a job and a house or apartment they can afford.

In Carrillo’s case, she could see information being lost when an interpreter, who spoke European Spanish, translated for a patient with diabetes who came from Mexico — an error that would otherwise have been missed.

“It was very much a disconnect in cultural awareness and cultural humility, one that I want to address as a nurse practitioner,” she said.

Belkiz Quintanilla, a nurse practitioner student, knew she wanted to be a nurse ever since she saw her grandfather, also a nurse, caring for people in his home in El Salvador. She and her family immigrated to the U.S. when she was 8 years old, and she translated for her parents, including in health care situations. “The nurses were always so caring and patient with me,” she said.

She has Temporary Protected Status, which means she is able to live and work in the U.S., but not qualify for federal student loans, so she started her academic career by going to community college, then transferred to the University of California, Berkeley to finish her bachelor’s degree.

Quintanilla reached out to Wagner before applying to the UCSF School of Nursing to see if she would be a good fit. “Imposter syndrome is real and I didn’t have a community at Cal of people like me,” she said. “I always felt isolated in a way because my friends couldn’t really understand my situation and the pressure that comes with being a first-gen student.”

They also couldn’t relate to the uncertainty that follows her, and the fear, of her work permit being cancelled, as they were for Salvadorians during the Trump Administration, then reinstated by the Biden Administration. “It’s been tough but it also pushes me to keep going because I am proud of everything that I’ve done and the bumps I’ve had to get over in order to be where I am today.”

The FirstGenRN program helps support her through all of this by providing a safe and supportive environment, she said.

It’s vital for nurses like her to be in health care because all patients, including those who face the same or similar immigration challenges, deserve equitable care.

“It’s important for people to connect with others like them, and being undocumented puts added stress and pressure that other people may not understand,” Quintanilla said. “First gens are more likely to have faced some types of health care disparities first hand. We’re able to provide perspectives on things that others might not be familiar with.”